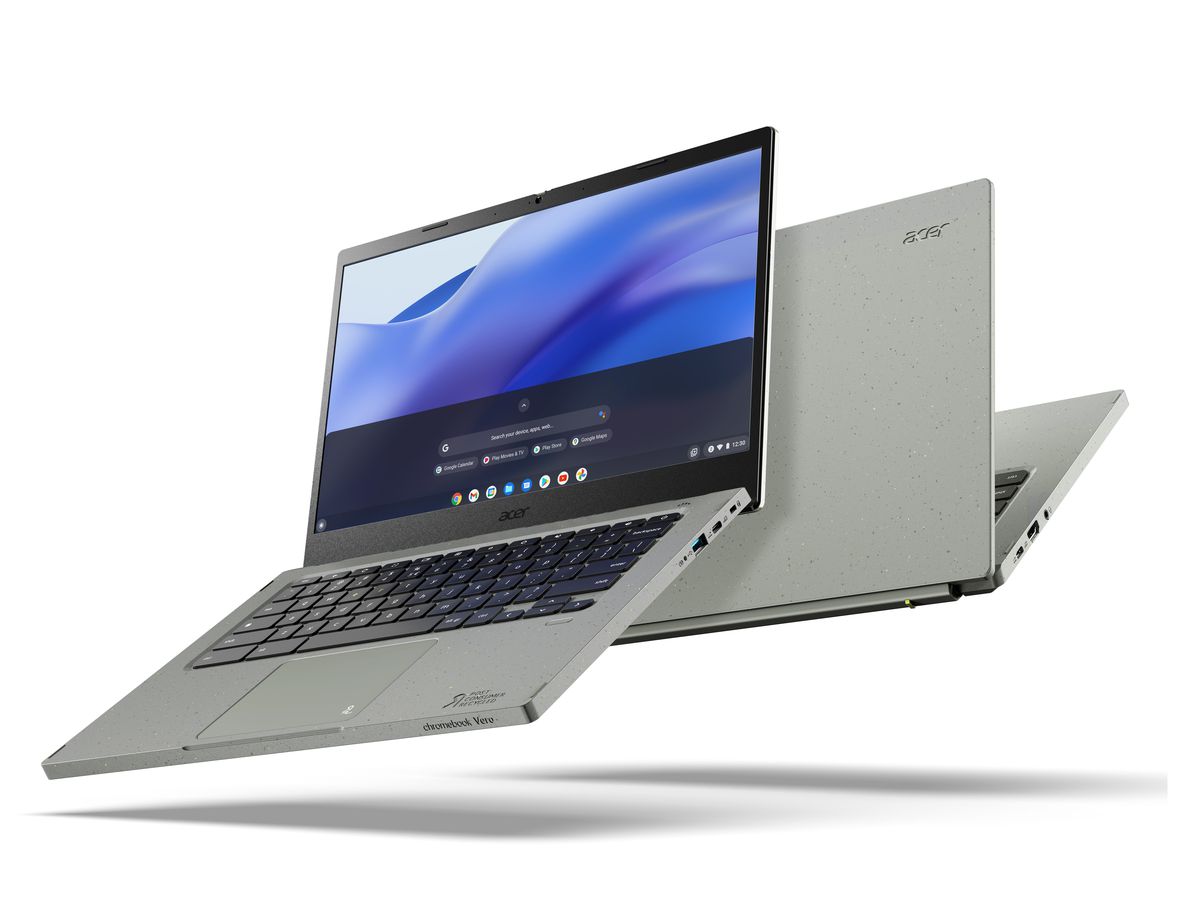 Acer is adding a Chromebook to its Vero lineup, which it says is meant to provide an “environmentally conscious” option to laptop buyers. Like the (rather disappointing) Windows laptops that came before it, the Chromebook Vero 514 is built using recycled plastic, has a chassis that is 99 percent recyclable, and comes in packaging that according to the company is 90 percent recycled paper. Acer’s press release also states that part of the Chromebook’s packaging “can be turned into a multi-purpose triangular laptop stand” if you hate throwing anything away.

Before we move on to recycling, though, let’s quickly go through the specs—it weighs just over 3 pounds, which is reasonable for a laptop with a 14-inch screen, and powered by 12th-gen Intel processors. Powered with Xe graphics. You can specify it with a variety of processors, including the five-core Pentium Gold 8505 (don’t let the core count fool you, only one is for performance while the rest is efficiency cores), Core i3-1215U, Core i5-1235U , and a Core i7-1255U. They’re all relatively low-power chips, suitable for an eco-minded computer, but if I were looking for a laptop I’d probably go with the i3 or i5 and avoid the Pentium altogether.

The 1080p screen is covered with Gorilla Glass, which makes it feel great if you choose a touchscreen model. Its 300 nits brightness won’t be enough if you’re constantly working in bright sunlight, but it’s still a step up from the 227-nit panel found on its Windows counterpart. The 514 should also improve the color rendition of the original Vero; While the Windows model can display only 66 percent of the sRGB gamut, Acer promises 100 percent coverage for its Chromebooks.

On paper the display is a big step up from Acer’s previous Vero laptops.

When it comes to ports, the 514 has a healthy selection – two USB-C ports, which can be used to rapidly charge the battery to 50 percent in 30 minutes, a USB-A port, a HDMI port and a headphone jack. The computer also comes with a “flare-reducing” 1080p webcam.

As for the laptop’s ecological footprint, Acer says the trackpad’s surface is made of 100 percent “ocean-bound plastic,” while the keycaps are made of 50 percent consumer-recyclable plastic. 30 percent of the chassis’s plastic is recycled. While it’s not necessarily as impressive as the $1,200 MacBook Air, which has a 100 percent recycled chassis, it’s nice to see Acer providing relatively fine details like Apple’s. I couldn’t find any numbers supporting Asus’ claim that its Chromebook Flip CX5 has an “eco-friendly design” because of its “recycled materials built-in.”

Acer also claims that Chromebooks are easy to repair and upgrade, with standard screws giving you access to memory and storage (which you may need to do, given that the biggest SSD you’ll ever get with the 514). Can get it is 256GB). While it’s not at the level that Framework is doing with its nearly fully repairable and upgradeable laptops, that computer is about twice the price; The base model 514, comes with a Core i3, 8GB of RAM and a 128GB SSD, starts at $499.99.

It’s another improvement versus the Windows version, which starts at $700, and doesn’t offer particularly great value at that price point, according to my colleague Monica Chin’s review from last year. The 514 is also running ChromeOS, which is widely considered to be less demanding than Windows—which could help the 514 stay out of landfills longer, which is nothing but good news from an environmental perspective. .

Overall it looks like Acer has addressed some of the problems with the original Vero laptop. However, I want to echo a note that Monica said in her review of that computer: Consuming your way up to ecological responsibility is hard, and it should last a long time if you have to buy something. An option for those who want to get a computer that’s a little eco-friendly is to install ChromeOS Flex on an older Windows laptop bought from a local used computer store or dig out of a closet (to reduce, reuse). Implementing the “reuse” step of doing recycle). But if you want something with more modern hardware, including creature comforts like a fingerprint reader, Acer says the Vero 514 will be available starting “mid-October” at Best Buy.