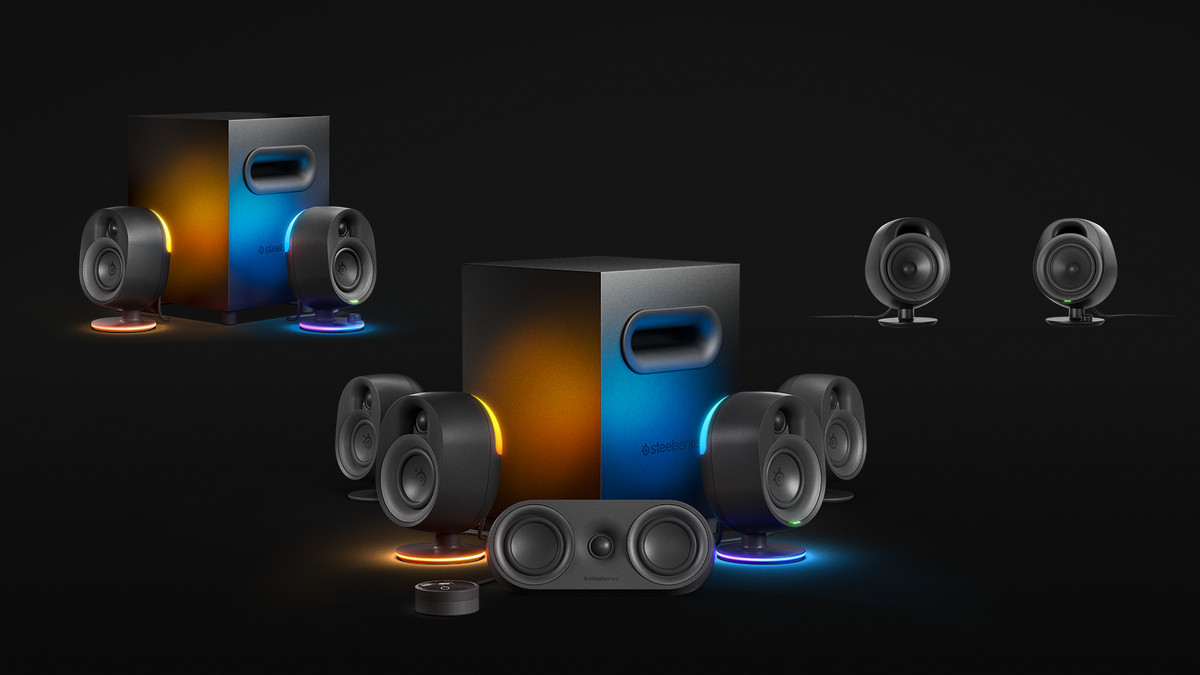 SteelSeries is introducing a new line of gaming-focused desktop PC speakers that deliver loud sound and options for RGB lighting and 5.1 surround. The new SteelSeries Arena speakers split into three different products – Arena 3, Arena 7, and Arena 9 – offer options ranging from simple to more ornate setups. I had to try the Arena 3 and Arena 7, which I imagine most people would choose the expensive top-tier models for. Here’s what they are all about.

Starting at the bottom, the $129.99 Arena 3 is a no-frills two-channel arrangement with four-inch drivers for PCs, Macs, and other devices via its 3.5mm connection. The Arena 7 takes the base speaker and adds programmable RGB lighting for a USB-A connection, a floor-standing subwoofer, and PlayStation compatibility—for a midrange $299.99 price. The top-of-the-line model, the Arena 9, enhances the formula for a 5.1 surround setup by adding a center wedge speaker, two wireless wall-mountable rear channels, and a small desktop control pad with OLED display that plugs in. Is. Woofers, all for $549.99.

A $99.99 ear-mounted Arena wireless microphone is also being released with the speaker. It’s like a headset mic without the headset, hooking up to your ear like you’re in special operations and allowing you to chat while listening through the Arena speakers. It charges via USB-C and supports 2.4GHz wireless on PCs, PlayStations, and Macs using a USB-C dongle (it also comes with a USB-A adapter).

These SteelSeries speakers are aimed squarely at Razer’s aging Nomo line from 2018, which offers a similar-looking audio setup of 2.0, 2.0 with RGB and 2.1 with RGB, and a subwoofer ranging from $129.99 to $599.99. Each Arenas offers the same or more for less money than the Razer line, with a design that’s a bit more sophisticated—if still quite gamer-y. While the Nomo Pro carries THX certification and Dolby Virtual Surround in its high-end 2.1 setup, Arenas instead opt for larger drivers in the range (four-inches compared to Razer’s three-inches) and true surround sound at the top end. Huh. a low price.

The budget-friendly Arena 3 2.0 speakers may lack fancy features like RGB lighting, but they allow two wired 3.5mm devices and a Bluetooth connection to pump in via four-inch drivers and a front-facing bass port. As well as the 3.5mm headset output on the rear of the quick access right speaker. Their sound is also tunable via the EQ controls in SteelSeries’ Sonar Audio software, which is a free download, and the speakers can be tilted on their stand to direct the sound upwards.

In the midrange, the Arena 7 could become the “just right” cup of oatmeal for those who want a dedicated 6.5-inch subwoofer and some RGB flare without full-surround overkill. This setup forgoes one of the Arena 3’s 3.5mm inputs, but it adds optical audio for a more serious sound setup. All major inputs are plugged into the subwoofer, though the right speaker retains that convenient headset jack under its bright LED dome. Because the Area 7 and 9 connect via USB, SteelSeries’ software suite allows LEDs to match what’s displayed on the screen and makes it possible to custom tailor the sound profile and EQ. That USB plug also allows these mid- and high-end speaker setups to be used with PlayStation consoles, but sadly the surround sound-capable Arena 9 is limited to a 2.1 output on Sony’s compatible systems.

In my limited testing of the Arena 3 and Arena 7 speakers with my desktop PC and Mac laptop, I found them to offer a nice, full sound without making my desk setup too exotic or outright flashy. (If you don’t mind a touch of RGB, mind you.) I normally prefer the 2.0 setup to keep things off the floor, but the Arena 7 shows a lot of promise for its capabilities and value. Is. It gets pretty loud, and the woofer can rattle small objects off your desk if you really crank it up, though the Arena 7’s volume can also go from very low to very loud with occasional slight adjustments. A little prone to let go. It may require some software tuning to get it properly for your setup.

It turns on pretty fast, and this woofer can rattle small objects off your desk if you really crank it up

Maybe it’s my personal aversion to desktop surround sound, inspired by my teenage years when the 7.1 Creative Labs setup gave me more wire clutter than actual sound quality, but the Arena 9 sounds like it. very At the first hesitation. Paying as much as a flagship game console for a desktop 5.1 speaker setup seems a bit irrational when most people choose a gaming headset — and SteelSeries has some strong options to consider out there.

Even with the prevalence of wireless and wired gaming headsets, there’s a convenient allure of having a good computer speaker setup that lets you sound better for everything from your games, music and videos to even work-from-home Zoom calls. Provides sounding audio. Just try not to accidentally hit the subwoofer under your desk. That thing is heavy with some very sharp corners, and no bass or good sound will shed tears.