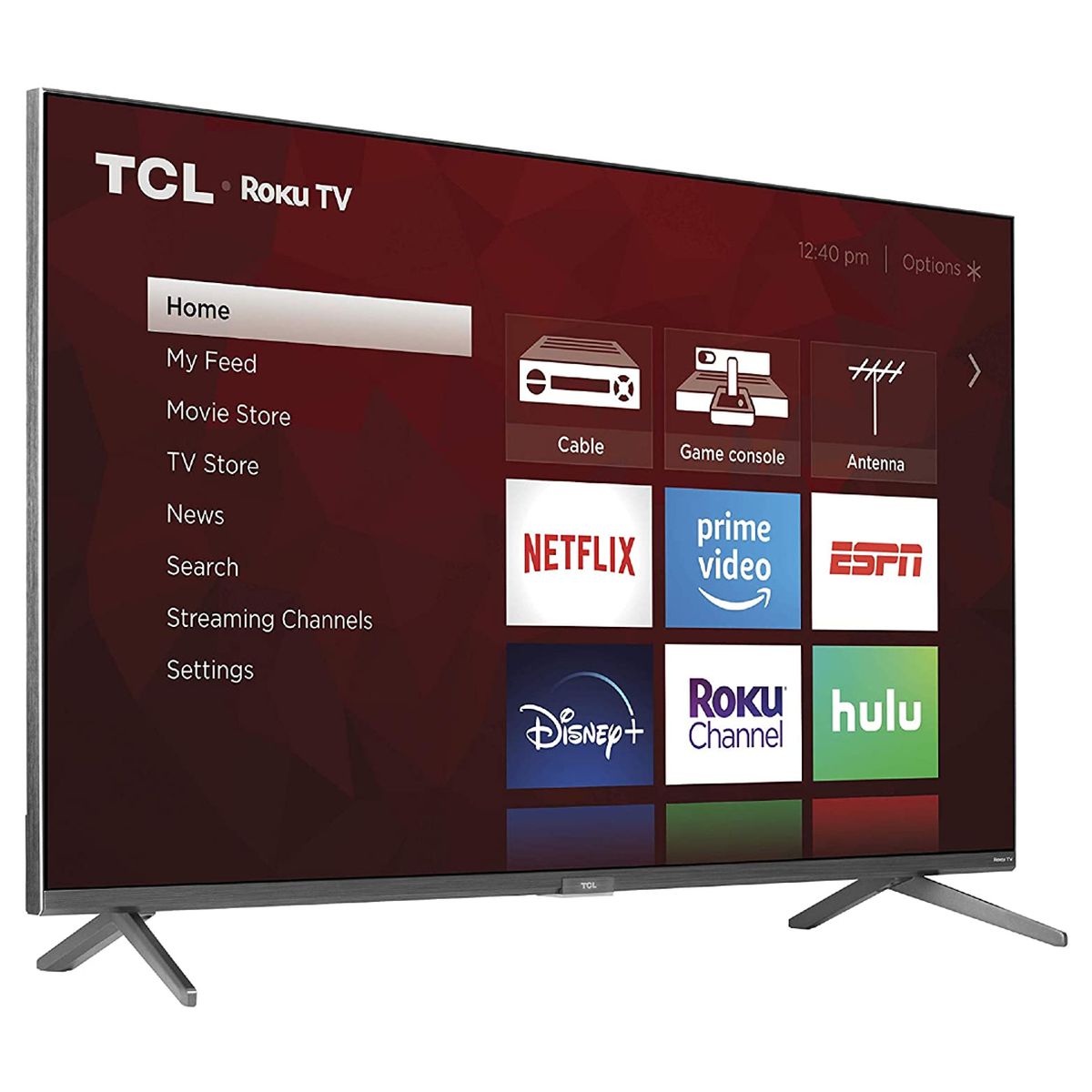 The future looks bright for those who are looking to nab a great TV at a substantial discount. Many manufacturers — including LG and Samsung — announced new versions of some of their most popular models earlier this year, ranging from The Frame and LG’s C2 lineup to Sony’s QD-OLED models. And now that manufacturers like Samsung and LG have officially launched their new TVs, we’re noticing prices falling on the last-gen, 2021 models. In some cases, we’re even beginning to see discounts on the newer 2022 models, including the aforementioned C2.

Right now, there are currently a number of discounted 4K TVs to choose from, spanning a wide variety of prices, size configurations, and feature sets. Whether you want a secondary TV for the bedroom or a high-end OLED that’s built for a cinema-like experience, we’ve picked out the best TV deals across four common categories.

The best 4K TV deals for most people

The TCL 6-Series R635 model is a good option if you are looking to balance price and performance. The last-gen Roku model sports a QLED panel, but it goes a step above with Mini LED backlighting, which brings even better brightness and contrast. The 55-inch model is currently on sale at Walmart, Amazon, and Best Buy for around $698 ($250 off), which is nearly the best price to date on the popular 6-Series model.

If you prefer the newer 6-Series — which supports HDR10 Plus and 4K gaming at 120Hz, as well as hands-free Google Assistant voice commands and the Google TV interface — the 55-inch configuration is currently available at Best Buy for $699.99, a cool $50 off the typical list price. The 65-inch model is also discounted at Best Buy and Amazon to $999.99 ($100 off), which is close to the best price we’ve seen to date on the larger configuration. Read our TCL 6-Series Google TV review.

Part of TCL’s 6-Series line, which features 4K HDR, Mini LED backlighting, and four HDMI ports. Unlike the latest model, the R635 runs on Roku’s TV platform and lacks some of the more recent upgrades, including support for 4K gaming at 120Hz.

The 2022 R646 is the latest model in TCL’s 6-Series line. The TV features 4K HDR and Mini LED backlighting, along with support for HDR10 Plus and 4K gaming at 120Hz. More importantly, it runs on Google TV software, unlike the last-gen model.

While the 5-Series sits below the 6-Series in TCL’s lineup, it’s also worth taking a look at if you’re on the hunt for a larger display. The latest model sports a QLED panel like the newest 6-Series, though, it lacks Mini LED backlighting and is limited to 120Hz at 1440p, whereas the 6-Series is capable of 4K at 120Hz. The newer model also uses Google TV software as opposed to the Roku software featured on the last-gen 5-Series, which allows it to provide personalized recommendations and access to thousands of streaming apps. It’s a good buy if you want a QLED TV with vibrant colors and good contrast, but don’t want to pay the premium for the latest 6-Series.

Like its predecessor, TCL’s latest 4-Series remains one of the more affordable options on the market. The 2022 model swaps the built-in Roku interface found on the prior model for the Google TV platform, however, and thus offers built-in support for Google Assistant (via the included remote) and more personalized content recommendations. At the same time, the LED TV continues to support HDR10, all the major streaming apps, and a 60Hz refresh rate.

It’s a pretty basic TV as far as functionality goes, but Amazon and Best Buy are both currently offering it in various configurations at a steep discount. Right now, for example, you can pick up the 55-inch model at Amazon and Best Buy for $319.99, which is about $180 off the MSRP and one of the TV’s best prices to date.

The latest version of TCL’s 4-Series swaps Roku’s streaming platform for Google TV, but is otherwise similar to the prior generation.

Sony’s 55-inch X80J TV has Google TV software built-in, so you won’t need to purchase any additional streaming boxes, like an Apple TV or Chromecast. The LED panel also supports HDR10, HLG, and Dolby Vision HDR, and has four HDMI ports (one of which is HDMI ARC). It’s a relatively low-frills affair, but it seems like a good deal that’s currently available at Walmart, where you can buy the 55-inch model for $598 instead of $799.99.

The best TV deals on a budget

You don’t have to spend a fortune for a 4K TV; spending $500 or less can still net you a 4K TV with good image quality and features. Insignia’s F30 Series Fire TV is the perfect case in point, one that supports HDR10, HDMI eARC, and Alexa-based voice commands via the included remote. The 4K set also provides access to Apple TV Plus, Disney Plus, Hulu, and most other popular streaming apps.

This 2020 model of Insignia’s Fire TV Edition 4K TV includes HDR10 for a more contrast-rich picture. It has three HDMI ports, too, with support for HDMI ARC and eARC, allowing you to send sound through an HDMI cable instead of audio cables.

Another Fire TV Edition TV deal happening now is on Toshiba’s 55-inch C350 Series Fire TV, which normally retails for $469.99. As the name might imply, the 4K LED TV allows you to stream content from services such as Disney Plus and Netflix and includes the option to watch live TV. The latest models also tout an Alexa-enabled remote, an easy-to-use interface, and support for both Dolby Vision HDR and HDR10.

An affordable, 4K LED TV with built-in Fire TV tech. This model sticks out from the bunch of other Fire TV Edition models with support for Dolby Vision HDR and HDR10.

Amazon’s first TV, the Omni Fire 4K TV, launched in November and starts at $370. The self-branded effort features the ability to query Alexa even when the TV is off, as well as a low input lag and support for two-way video calling. We gave it a 7 out of 10 in our review, while noting how the TV shows great promise thanks to its robust Alexa integration and support for Apple’s AirPlay 2, among other things. At the same time, however, TCL and other similarly priced television makers offer better picture quality.

If you’re looking for a budget-friendly TV with good picture quality, Vizio’s midrange M7-Series Quantum TV is worthy of consideration. The 2021 model sports a 60Hz panel, along with support for Apple’s AirPlay 2, AMD FreeSync, and a variable refresh rate (VRR). It also touts Vizio’s SmartCast system and a built-in Chromecast, allowing you to cast content from your phone and access Netflix, Disney Plus, and all your favorite streaming services.

Vizio’s newest M7-Series Quantum TV sports a 60Hz panel, along with native FreeSync support, a variable refresh rate (VRR), and a built-in Chromecast for accessing all of your favorite apps.

The best deals on OLED TVs

OLED televisions offer the best image quality you can get in a mainstream TV, and many were heavily discounted during Black Friday, Cyber Monday, and the Super Bowl. If you missed out on those sales, however, you may still have another shot at landing a good deal, as many of the best models are still currently available at a discount.

In terms of features, the A1 offers support for both Amazon Alexa and Google Assistant, as well as an automatic low-latency mode. Unlike more expensive OLEDs, however, the 4K TV doesn’t come with a slate of advanced gaming features, like those found on LG’s C1 and C2 models. It offers a slower 60Hz display and lacks HDMI 2.1, for example, and doesn’t support a variable refresh rate.

LG’s entry-level OLED TV, the A1, has an auto low-latency mode and offers support for both Alexa and Google Assistant. Unlike pricier OLEDs, however, it lacks a fast refresh rate.

Sony’s PS5 and Microsoft’s Xbox Series X can play 4K games with HDR at up to 120 frames per second. So, naturally, if you don’t have a TV that takes full advantage of your console, it might be time to upgrade to one of the models below. Note that, for the best experience, you’ll want a TV that supports HDMI 2.1.

If you’re looking for an impressive TV, we recommend turning your attention to LG’s C1 and the new C2 lines. The 4K TVs touts support for Nvidia G-Sync and AMD Freesync technologies, along with a 120Hz refresh rate and low input lag. They also boast a settings pane dubbed “Game Optimizer,” which conveniently brings together a host of game-centric settings — refresh rate, latency, etc… — for quicker access.

LG’s C1 and C2 are very similar, though, there are a few key differences. The newer C2, for example, weighs less than the C1 and is available in a 42-inch variant (that starts at $1,399.99) while the C1 lineup starts with a 48-inch model for $1,499.99. The C2 also offers a few additional features, like a brighter “Evo” panel, the ability to log into different user profiles, and a new “dark room” setting that’s designed to reduce eyestrain.

Unlike its predecessor, LG’s C2 OLED starts with a 42-inch model and is both lighter and brighter. It also boasts a “dark room” setting to reduce eyestrain, as well as the ability to log into different user profiles.

As for the C1, you can pick up the 65-inch model at Amazon and Best Buy right now for around $1,597, which is about $900 off the MSRP. BuyDig, meanwhile, is also offering it for the same price, but also throwing in a $100 Visa gift card and a four-year warranty. The current sale price isn’t an all-time low, but it’s only $50 shy of the TV’s best price to date.

LG’s C1 OLED starts with a 48-inch model, going up to 83 inches. All sizes of this OLED feature a 120Hz refresh rate, FreeSync and G-Sync support, and a fast processor.

Samsung’s The Frame is probably the most unique TV on this list. The television blends into your home decor, displaying customizable images that look like a piece of decorative art if its motion sensor detects someone in the room. When turned on, however, it transforms into an HDR-compatible QLED TV with Amazon’s Alexa built-in and support for AirPlay 2. The stylish, 4K TV also boasts a 120Hz refresh rate (when you buy the 55-inch model or larger), support for AMD Freesync technologies, access to all the popular streaming services, and four HDMI ports.

Unlike its predecessor, the 2022 version also boasts a new anti-glare, low-reflection matte coating. As a result, images bear a remarkable resemblance to actual canvas paintings you might see hanging in a museum. Additionally, Samsung’s TVs are amongst the first to include Microsoft’s Xbox TV app in their gaming hub, meaning Xbox Game Pass Ultimate subscribers can stream more than 100 Xbox games without a console. Some games, like Fortnite, are even available to stream without a Game Pass subscription.

Just be aware that, unlike most other televisions in this price range, the latest Frame doesn’t offer Dolby Vision support and lacks full-array local dimming. If that doesn’t bother you, however, Woot is selling the TV in various configurations at a new all-time low. Right now, for example, you can buy the 43-inch model at Woot for $739.99 instead of $997.99, or the 55-inch model for $1,144.99 instead of $1,499.99.